Pokemon Yellow Playthrough #7: The Water Gym, and Forcing Bill to be a Pokemon for as long as I want

I traded the Charmander I got from the NPC in Yellow for DUX from my Red Playthrough, who knows Cut and Fly. Despite my initial plan to ditch DUX part way through the Red run, DUX has become very important to my plans, for good and for evil! It's a great thing to see! I wonder if Yellow will let me get a third DUX; perhaps we could assemble an entire team of DUX clones

Anyways, we still need to beat Misty to use Cut outside of battle, so we're trapped here, unless we beat her. Of course, we could also just NOT rob bill of his humanity and leave that way, but this is more fun

I doubt this gym will be easy; my team can only hit water types neutrally at best, and they take lots of damage from special attacks, and I get the funny feeling that Yellow may have tried to rebalance this gym to be harder to make up for the obvious type weakness the gym has against the mascot starter. I've beaten all the trainers in the area though, and grinding would be kind of slow; since I have a full party, I guess there's no harm in  YOLOing the fight X3

As is often the case, the misty fight was surprisingly intense! You can watch it here! First thing that's interesting, is she has loads of extra text! I guess this is from the anime? The fight itself was brutal; Kiddloo was able to take out Staryu, but took lots of damage. Then Starmie came out and started trashing the team! Not only do they have good special attacks that cripple my low special team, but they have X defends and harden to make physical attacks do nothing! It got so bad, I had to rely on sand attack and supersonic to immobilize them, and they still managed to cause serious damage even with the low chance of hitting! I had to fish for poison with Riios' poison sting, and just survive and do chip damage as the battle came to a close; absolutely brutal

With that out of the way, we can leave Bill as a pokemon! Here's the proof in video form! I hope he enjoys it; he'll probably be stuck that way forever

This left the game in a curious state; the house that was robbed is still blocked from the front by the police officer, but I can now fight the rocket grunt from behind! And then I could enter the house, without moving the officer! At least, I thought I could; as you can see in this video, Yellow has a failsafe for this! It moves the police officer when you collect the TM! I'll bet this causes a softlock in Red and Green! For a moment, I was worried this may have set a flag to make Bill human again, but thankfully, he's still a pokemon. This is the third time I've checked in and intentionally left him to be a pokemon; he probably doesn't like me all that much now 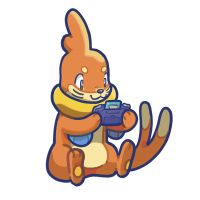 S*********
Some winners in this raffle have chosen to hide their names and/or avatars.
You can choose to show your name and avatar by going to your settings page.
Trade Offer