This raffle series will not include any information past gen 7. Also, prior entries in the series can be viewed here!

Venonat is a pokemon I recall seeing a lot in the anime and/or in promotional material. I'm not entirely sure where I saw it, just that I saw it X3 Venonat was a sort of common pokemon in Kanto, appearing with mid tier spawn rates on a couple of long routes and in the safari zone, and Venomoth appear in notable end game locations, like Victory road and Cerulean Cave! But they didn't really appear in any regions beyond Kanto or Johto, making them very rare to see outside of those regions. I'm gonna be honest, I don't think I've ever used either of these pokemon personally, and there isn't a lot of special trivia around them out there. But I'll do my best X3

Venonat is one of those curious few pokemon that seems to be it's own unique species, separate from the real world! They look and act almost nothing like Gnats (the only thing they have in common is compound eyes)! I love the designs that differ so drastically from the real world as to be their own thing entirely, really makes the pokemon world feel a bit more real :3 Their early pokedex entries and the gen 1 anime say that their eyes actually function like radar (which makes as much sense as seeing with your ears X3). Also, in their Fire Red pokedex entry (and only their Fire Red entry), it says "The eyes can also shoot powerful beams". I know they get moves like psybeam, but that entry makes them sound like superman or something

Venomoth has actually gone through a minor design change! In early promotional artwork for Gen 1, Venomoth was shown to have different color scheme and three distinct yellow spots on the back of its' wings! This was changed immediately though; Venomoths sprites in yellow clearly show the spots aren't there! Venomoth also shares the same pokemon category as as Dustox; they're both known as the Poison Moth Pokemon (we have two Poison Moths! Which isn't that much, but it's weird that it happened twice X3) Venomoth is also one of those confusing pokemon that is clearly flying, but is still affected by ground type moves, due to not being flying type or having the ability levitate. Also, Venomoth curiously has different potential hold items across the various games; XD and Fire Red/Leaf Green make them hold silver powder, Gen 4 and 5 make them hold Shed Shells, and Omega Ruby and Alpha Sapphire differ from each other; In Omega Ruby, they can be found with Silver Powder, and in Alpha Sapphire, they can have Shed Shells! And of course, being obtainable in XD makes them one of the few pokemon that can be obtained as a Shadow Pokemon!

While I've never used a Venomoth, I technically have by proxy! 'AATTVVV' or All Terrain Venomoth, was a very memorable member of the Twitch Plays Pokemon Red team! They eventually made it into the hall of fame, after defeating lances strongest Dragonite! Gen 1 trainers always try to use super effective moves, even if they happen to be useless status moves, and since dragonite knew agility and barrier, two psychic type moves, and venomoth was weak to psychic, lance ignored dragonites damaging moves and just spammed barrier and agility, and simply lost out to poison damage, leading to a slow, but very hype inducing victory! 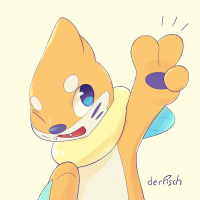 SPPacca
Mustelids are a must!

y*****
Some winners in this raffle have chosen to hide their names and/or avatars.
You can choose to show your name and avatar by going to your settings page.
Trade Offer