Last time Hop yelled and I ate a Bede burger or something.

Today we start off with Spinch evolving into a Charjabug after a quick trainer battle. In the next trainer battle, Scooter evolved into a Carkol. For my encounter on Route 4, I got Joop Shoop the Wooloo. Dang it. Apparently this sheep is naughty and mischievous. Well then. Anywho it appears that Sonia wanted to show us a geoglyph and how it might be connected to the darkest day. Over at the stadium, we meet up with the Poke Ball Guy, who gives us the Friend Ball. Well it's time for me to start herding some sheep around, and then I can fight Milo. As this event starts to rev up, Jay Jace hones his claws as the Gossifleur spins rapidly and gives him a helping of magical leaves. Jay Jace grows big as he lets loose a powerful airstream, blowing away the Gossifleur. The Eldegoss comes out and grows big as Jay Jace blasts it away, securing the win and the Grass Badge!

After that win, I decided to head back to Wedghurst to check out and catch an interesting Slowpoke. His name is Barold, by the way. After that, I head on over to the Isle of Armor to find a guy that's too scared to leave the station. It turns out that person was a lady named Klara, who also mistakes us for a new student at the Master Dojo. Klara challenges us to a battle, in which Jay Jace is glad to pluck her Venipede. After that, he goes on a power trip against her Slowpoke, and then unleashes his 3 hit fury. Jay Jace plucks once more, knocking the Slowpoke down. Since Klara's a bit of a sore loser, she tells us not to head to the Master Dojo. Well fuck her, I'm going over there. In front of the dojo we meet Dais- er, Honey, who tells us that Klara is training to become a gym leader.

Now inside we meet a man named Mustard. He mustard us come in. He too wishes to battle us. Right away, Jay Jace plucks at his Mienfoo after it tried to fake him out. Mustard can smell danger apparently. I sent out 2OP Plz Nerf against his Shinx. 2OP Plz Nerf hones her claws, and then slashes with metal claws. She then spins rapidly right out into Scooter who then smacks the Shinx down. He knows that we really weren't supposed to be the new student, but he doesn't care because he's cool like that. Anywho, he tells us that there are three trails we must complete in order to receive the secret armor. Please let it be soup, no wait, sauce. No one cares about the secret soup, only the secret sauce. Klara then complains that she doesn't have a uniform, but right as she got it, it was stolen from right under her nose by a Slowpoke. We then learn that the first trial is to defeat said Slowpoke. This is going to be fun.

Next time we shall rangle some not so slow Slowpoke! 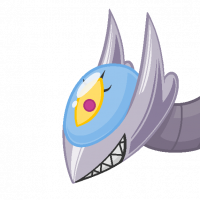 K****
Some winners in this raffle have chosen to hide their names and/or avatars.
You can choose to show your name and avatar by going to your settings page.
Trade Offer